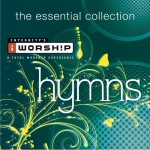 If you’ve been checking me out, you know me by now.  You know that I’m an odd lover of traditional hymns and modern worship.  So I usually pick up anything that says “hymns” on it and looks remotely modern, to see what kind of work is going on in that field.  I therefore picked up “iworship hymns” from Integrity music.  They’ve been putting out this iworship series for a while now, and they’re latest issue is an album dedicated to hymns.  It is a compilation of previously-recorded, previously-released tracks from great Integrity artists like Paul Baloche, Gateway Worship, Hillsong, New Life, etc.

The album is a good one.  It’s a great listen and has great production.  The texts of the songs are wonderful, and the worship leaders are all great, authentic people, passionate about God’s glory.  But I’m discouraged about what’s going on in modern worship with regards to “resetting” hymns, and this is a prime example.*

I’ll begin my analysis with a vignette of a typical conversation I often have with people when I tell them about what I’m trying to accomplish with The Glad Sound. I’m sure my friends at Indelible Grace, Red Mountain Church, and Sojourn Community Church have had similar dialogues.

Person:  So what’s your project about?

Zac:  We’re taking the texts of old hymns and setting them to new music…new melodies, chord structures, and instrumentation.

Person:  Oh, I LOVE that!  I love it when we sing “updated” hymns in our church.

Zac:  Tell me about that a bit more.

Person:  You know, when they take an old hymn and “jazz it up” by adding drums or guitars or something.  They just make those outdated hymns contemporary.

Zac:  Oh, cool.  (sigh…)  [the conversation continues as I try to explain how what we’re doing is different, and hopefully better]

I don’t know how many times I have had this conversation.  People don’t understand that when we’re “resetting” hymns, we are not keeping the music, at all.  We are not “updating” or “jazzing up” the melodies and chord structures.  It’s as though we’re taking a written poem and setting music to it for the first time.  The old tune and the new tune have nothing to do with each other, except that they can be affixed to the same text. I’m not completely against this type of re-hymn setting.  I think in some cases it works and sounds great (for some reason, I’ve felt that songs in 3/4 and 6/8 work better for this).  But more often than not, it sounds forced, canned, and a bit artificial.  There’s a good reason for this.  The music was composed in a different style and genre (often block chord writing) that doesn’t easily and naturally import to modern styles (melodies with fewer chord changes between).  Often, I feel that the original composers are rolling over in their graves when their music is bent out of shape.  (Again, I’m not totally against it…I plan on at least attempting to jam the plainsong chant melody of “Of the Father’s Love Begotten” into a modern groove on our next album…traditionalites, don’t shoot me, please).

These types of conversations, and these types of “updated hymns” albums like “iworship hymns,” betray a myopia quite pervasive in mainstream evangelical music: the only way to do hymns in modern worship settings is to take the original melodies and affix a new instrumentation, syncopation, and beat to them.  Friends, THERE IS ANOTHER WAY!  And this other way is something that’s been going on for centuries (see my previous post on this for more detail).  For centuries, musicians have sought to re-clothe an old hymn in the current musical vernacular.  Almost any time you look in a hymnal and see a text written in one year and the music written much later, that’s usually the case.

Why is it that we only think we have one option here?  Why is it that new modern worship “hymns” projects deliver to us the same thing again and again?  Please don’t take me as complaining about these projects.  I’m more observing and lamenting the fact that there aren’t more who are “updating” hymns in ways which feel more natural to everyone.  In conversations where I’m talking to a lover of old hymns who actually gets what I’m doing, they’re appreciative, not only that I’m giving modern worshipers a taste of old hymns, but that I’m not tampering with the musical integrity of the tunes previously used for these hymns.

I just know that there is so much more to be done in re-setting hymns, but every time I pick up a new “hymns” album, it’s just the same old concept, recycled.  There are SO many hymns to be brought back to the church, and there are SO many great songwriters out there!  Step up!  You can have so much more freedom with these hymns than you might realize!

*One mild exception to my discussion on the iworship hymns album is “When I Survey,” by Kathryn Scott, re-set to the tune to “O Danny Boy.”  It’s actually a beautiful setting and brings out some different nuances of the text that I’m interested in exploring.

5 Comments on “iworship hymns…c’mon, let’s think differently about how to “redo” hymns”