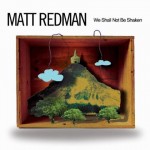 My recommendation is that worship leaders and worshipers alike should buy this album.  My three favorite songs, which I hope to use at my church, are “You Alone Can Rescue,” “How Great is Your Faithfulness,” and “Remembrance.”

I must say I’ve been following Redman for a long time—since the late 90s.  His early albums were great. In the 2000s, Where Angels Fear to Tread was a powerful album for me, mostly because, well before it became famous, “Blessed Be Your Name” became a heart-song of mine as God took my wife and me through the valley of the shadow of death.  After Angels came Beautiful News, and I must admit that I was disappointed in it.  My expectations were probably too high, but too many songs seemed either unsingable, too bland, or attempting too much chordally/musically.  We Shall Not Be Shaken is, in my mind, a few large leaps back up “great worship album” hill.

As I’ve said about every album Redman has put out, We Shall Not Be Shaken shows Redman to be a worship leader who actually reads His Bible.  His songs, while existential, are filled with Bible quotes, Scriptural allusion, and theological depth.  In this respect, he seems to be getting better with every subsequent album.

The production on this album is great…better than previous collections.  There is a nice sonic variety within the pop/rock genre.  Electric guitars aren’t monochromatic.  Some songs are piano-driven rather than guitar-driven.  There are U2 and Coldplay overtones here and there, and I’m hearing a more noticeable use of sampling/programming/looping than what has been on previous albums.  There are more mid- and up-tempo songs (which, personally, I find harder to write [with any substance] than slower songs).  Redman’s voice has never been a flashy one.  In many ways, I view him as the Rich Mullins of modern worship, in the sense that his recordings are admired not because he’s a virtuoso vocalist but because he writes incredible texts.  And there’s something refreshing about a “straight up” vocalist every once in a while.  You can tell Redman is a worship leader rather than a performer.  (I like Brenton Brown’s recordings for a lot of those same reasons.)

I praise Redman and this album chiefly for its gospel-centeredness.  Too many worship songs ignore the gospel, probably because the whole concept of gospel-as-entrance-ticket (but not as our ongoing source of sustenance and sanctification) is still pretty prevalent in evangelicalism.  So, that Redman continually points to the life and work of Christ, and that he roots our worship in God’s finished work in Jesus, are necessary correctives/emphases for mainstream evangelical worship.  The album is a gospel-centered album.

I also applaud Redman and this album for its God-centeredness.  There’s a lot of “You” and much less of “me.”  And any time there is “me,” it’s always set in the context of “You.”  Song after song exalts God’s greatness, faithfulness, and enduring love.  As John Witvliet has pointed out about the Psalms, Redman grounds praise in God’s attributes and His deeds.  Worship is not a mere mystical encounter with the force of the Divine, it is a recounting of the works of God in history, ushering forth an overflow of praise.  Bravo, Mr. Redman!  The title track, “We Shall Not Be Shaken,” repeats a mantra similar those used by Hillsong United lyricists:

We shall, we shall not be shaken.

But, unlike the self-triumphalism one sometimes finds in the texts of modern worship songs, Redman points back to the reason that we are not shaken:

For You are, You are never changing.

Our triumph is grounded in Christ’s.  I appreciate that Redman makes that explicit, because when it’s not, it has a subtle way of educating our congregations to be boastful in ourselves or to think that we’ve got the spiritual fortitude to pull ourselves up by our own bootstraps.  The theme of God’s triumph and what that means for us reverberates throughout many tracks on the album—our glory is only great as it is derivative of God’s.

Even in Redman’s communion song, “Remembrance,” where it speaks of our remembrance leading us into worship, Redman is quick to point out:

By Your mercy we come to Your table
By Your grace, You are making us faithful

What a great line! We’re only faithful because God made us so.  More God, less me.  Amen!  “Remembrance” is a great song for the celebration of the Lord’s Supper (not enough modern worship songs are written for this sacred, vital act of Christian worship!).  Redman seems, too, to be stretching his theological boundaries, coming from the charismatic side of evangelicalism.  Probably more implicit than explicit, there are overtones of Christ’s real presence in the sacrament, in climactic lines such as:

One can understand this line from a Zwinglian, purely symbolic perspective by saying that Redman is just referring to how the table points to the wedding feast and that the request for Jesus to “come in glory,” is a longing for Jesus to come in the eschaton.  However, I think the context shows that Redman intended for this request to be a desired reality in the moment of Holy Communion.  In this instance, Redman sounds more Reformed than Pentecostal…though I’m definitely willing to admit to biased lenses.  So, for Redman, it seems that this song goes further than its title…communion is more than remembrance.  It is an encounter with the living Christ—albeit mysterious and veiled in the “how’s.”  An aside to this song:  I love the opening programming on “Remembrance;” it reminds me of some Radiohead song I can’t quite recall right now (I think it’s on Kid A).

The Three Best Songs on the Album

I have three favorites on the album, which I will not rank, because they are too fresh.  They’re merely in order of appearance.  The first is “You Alone Can Rescue.”  It’s a slow to mid-tempo song with a nice dynamic contrast.  The lyrics are singable and attainable.  I love it for its high view of God’s work in our salvation: all God, no me.

The second favorite is “How Great is Your Faithfulness.”  It’s an accessible song in a steady, mid-tempo 6/8 beat.  It’s got a splendidly climactic chorus (the recorded key is probably a bit high for congregations…I’d probably set it in G at church).  Though he doesn’t mention the word “covenant,” the song is filled with covenantal overtones.  It points to God’s promises, His unfailing love and justice, His steadfast, unwavering will.  I love it!

The third favorite is the aforementioned “Remembrance,” mostly because it puts a celebrative spin on Holy Communion (while still engendering reverence) and because I find myself in agreement with its apparent stance on the presence of Christ in communion (see above).

“For Your Glory” is a nice song to encourage dancing in congregations (still tough for me to encourage in my congregation whose history has engendered a lot of stiffness!).  It’s a 120-ish bpm up-tempo number.  Its chorus is grounded in the famous Psalm often used in Advent, Psalm 24: “Lift up your heads, O you gates, be lifted up you ancient doors, that the King of glory may come in.”

“My Hope” is exciting for me
personally because Redman has set an old hymn (“My Hope is Built on Nothing Less”) to a new melody.  He’s replaced the standard chorus with a different one, equally beautiful, while a bit more personal.  The music in this song is epically exquisite—piano and strings.  With an interesting interplay of key-structure: verses are in G-minor and the choruses are in G-major (with a V of vi used to transition from minor to major).  Redman only uses two verses from the original hymn, but it would be easy to incorporate all the verses of Edward Mote’s original text.  The album ends on this song, which is a soft and beautiful “period” given to a beautiful set of songs.

One Note, One Minor Error

Don’t confuse “The More We See” with a song Redman sings that was hot on Christian radio a few months back, called, “King of Wonders,” which has the ending line, “the more we see the more we love You.”  This “The More We See” is a different song.  I don’t think it’s close to being the best on the album, but I wanted to point it out to any who might think that they’re getting “King of Wonders” when they’re not.

There’s an error in the iTunes digital booklet.  The lyrics to “We Shall Not Be Shaken” were duplicated under “Through it All”…no doubt an editorial cutting and pasting issue.  Fortunately (and this isn’t always the case on recordings), the vocals are sung, EQ-ed, and mixed in such a way that the text is clearly audible and understandable.

3 Comments on “Review of Matt Redman’s new album, We Shall Not Be Shaken”